by The Society of American Florists (SAF) | Mind, Wellness 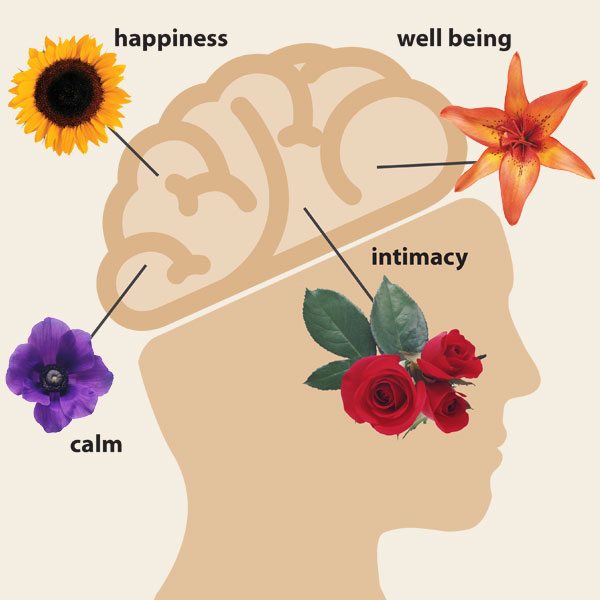 With today’s high-tech and fast-paced lifestyle taking its daily toll on our lives, experts advise exercise and other personal lifestyle changes to relieve stress. According to behavioral research conducted at Rutgers, The State University of New Jersey, nature provides us with a simple way to improve emotional health – flowers. The presence of flowers triggers happy emotions, heightens feelings of life satisfaction and affects social behavior in a positive manner far beyond what is normally believed.

“What’s most exciting about this study is that it challenges established scientific beliefs about how people can manage their day-to-day moods in a healthy and natural way,” said Jeannette Haviland-Jones, Ph.D., Professor of Psychology at Rutgers and lead researcher on the study.

A team of researchers explored the link between flowers and life satisfaction in a 10-month study of participants’ behavioral and emotional responses to receiving flowers. The results show that flowers are a natural and healthful moderator of moods.

The study also explored where in their homes people display flowers. The arrangements were placed in areas of the home that are open to visitors – such as foyers, living rooms and dining rooms – suggesting that flowers are a symbol for sharing.

“Flowers bring about positive emotional feelings in those who enter a room,” said Dr. Haviland-Jones. “They make the space more welcoming and create a sharing atmosphere.”

The Emotional Impact of Flowers Study was conducted by Jeannette M. Haviland-Jones, Ph.D., Professor of Psychology, Project Director, Human Development Lab at Rutgers, The State University of New Jersey. Dr. Haviland-Jones is a psychologist and internationally recognized authority in the role of emotional development in human behavior and nonverbal emotional signals and response.

The research adds a scientific foundation to what many consider to be common knowledge – that flowers have a strong, beneficial impact on those who receive them. The Society of American Florists worked in cooperation with the Rutgers research team, bringing an expertise of flowers to the project.

The participants were 147 women, ranging equally in age, educational level, and career and lifestyle choice. Women were studied because previous research on emotion demonstrates that women are more discerning of moods, more willing to participate in studies on moods and more involved in emotional management within the home and at work.

Study participants knew they would have a gift delivered, but they did not know what the gift would be. This “secrecy” was to obtain an honest first reaction to the gift as a measure of the direct effect of flowers on immediate mood.

Trained researchers measured the behavior and emotional expression of participants when they received the flowers. Three different smiles as well as verbal reactions were coded upon the delivery of the flowers. The information was recorded into a field computer within the first 5 seconds of the flower delivery, to measure accurately the first, immediate reaction.

Want to Get Him to Open Up? Send Flowers.

Conducted by Rutgers University student researcher Holly Hale and psychology professor Jeannette Haviland-Jones, Ph.D., the study involved two groups of men who varied in age and ethnicity, one group who received a surprise gift of flowers and a control group who did not. The subjects’ verbal cues and body language (measures of social interaction) were studied.
The men who received flowers demonstrated increased eye contact in conversation, stood in closer proximity to the researchers, and produced more and truer smiles than those men who did not receive flowers.

While in general, women displayed a greater level of emotion in their study, the effects are equal. “When it comes to receiving flowers, men and women are on the same playing field,” said Haviland-Jones. “It seems that we all express extraordinary delight and increase our social behavior.”

Jeannette Haviland-Jones, Ph.D., is a professor of psychology at Rutgers University and the director of its Human Emotions Lab. An internationally recognized authority on the role of emotional development in human behavior and nonverbal emotional signals and response, Haviland-Jones has published several books on adolescence and emotion and is co-editor of the Handbook of Emotion, for which she won a Critics Circle Award.

Harvard: Living with Flowers Strengthens Feelings of Compassion, and Decreases Anxiety and Worry